Danny Borrell, was a long-time member of NEOWTA and known for freely giving of his talents to anyone who asked.  You might get a piece or two of wood along with the help. 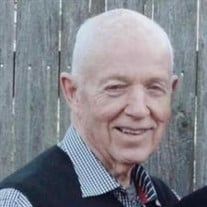 Danny Joe Borrell was born on June 15, 1942, in Enid, Oklahoma to Van Wade Borrell and Nelda Lucy (Kindred) Borrell. He passed from this life on Saturday, October 16, 2021, at his home in Tulsa, Oklahoma at the age of 79 years. Danny moved to Tulsa in middle school and graduated with the Will Rogers High School Class of 1960. He then attended Rhema Bible Training Center and was part of the first class through the school. Danny was married on February 14, 1965, in Tulsa to Sarah Jane (Franklin) Borrell. He spent most of his working life as a pastor at Faith Center Foursquare Church in Tulsa for 47 years. Danny was a jack of all trades and in his spare time he enjoyed woodworking, carpentry and fishing. Those he leaves behind who hold many cherished memories include:
His Wife; Sarah Borrell
Daughter; Danette Mangum and husband Jerry
Granddaughter; Hannah Shelton-Edens and husband John
Great Grandson; Dominic Shelton
He was preceded in death by his parents, Van and Nelda, and 2 brothers, Smoky and Butch.
A memorial service for Danny Borrell will be held this Sunday, November 7, at 3 pm.  The service will be held a Faith Center Foursquare Church located at 1130 S 119th E Ave, Tulsa (11th St and S. 119th East Ave).  All are welcome to attend.

Robert Hawks, Jr. of Tulsa, Oklahoma passed away peacefully at home on June 14, 2021.  Bob was born May 10, 1920, to Robert and Florence Moser Hawks on the family farm west of Hiawatha, Kansas.

Bob graduated from Hiawatha High School and attended Highland Junior
College until his National Guard Unit was nationalized in 1940.  After five years of active duty he settled in Los Angeles and enrolled in the Art Center to study photography.  During his active duty he had admired, befriended and quizzed Army photographers on  where was the best place to learn photography.  The Los Angeles Art Center always was on the top of the list.  While waiting for his application to be accepted at the Art Center he worked for RCA records first pressing vinyl records and then in the studio where he recorded many famous voices.

After three intense years of study he headed east, stopped in Tulsa and never left.  He built his first lab in a storage space in the basement of an apartment building in downtown Tulsa - his first residence in Oklahoma.  In 1950 he purchased a two-story residence on Main Street in downtown Tulsa where he lived and converted the lower level to a studio.  He remained there until 1967 when he bought the Crawford Drug property at 1345 E 15th where he built a new studio and lab..  That was at the beginning of the resurgence on Cherry Street.  His client list included PSO, Telex, SSC,  Zebco, Lowrance, Oral Roberts, Refinery Engineers, Daisy-Heddon, Texaco, Standard Oil of Illinois, Sun Oil, Citgo, several engineering and architectural firms along with dozens of smaller companies that helped fill in the gaps.  He soon realized it was necessary for him to be able to travel to successfully service his clients.  In 1950 he was able to obtain his private pilot's license, thanks to the GI bill which had also helped him with his schooling at the Art Center.  Early in his career he began a long and stimulating association with Meredith Publishing which generated over half the income during the last 15 years he owned the company.

In 1985 the company was sold to Gene Johnson, a long time employee who brought his son into the business.  Unfortunately Gene passed away but, his son, Scott Johnson, continues to run Hawks Photography.

Following his retirement from photography Bob became enthralled with woodturning and had another career related to that “hobby” which he relished.  In 2020 he was honored with an exhibit of both his photography and woodturning at the 108 Contemporary Gallery in Tulsa.

Bob also spent many years as a volunteer on the front desk at St John Medical Center.

At his request there will be no services but on his next (102nd) birthday his ashes will be scattered by the big white rock above the pond on the farm in northeastern Kansas where he was born and raised.

The family would like to request that any memorials be directed to the Northeast Oklahoma Woodturners (NEOWTA) Bob Hawks Memorial Fund.  He was a founder of this organization and his decades-long commitment was deeply appreciated by the Club, a 501 (c)(3) educational nonprofit.  All donated funds will be placed in the building fund and applied to future property improvements to the building and grounds.  He was especially interested in the Club being able to construct a paved parking lot beside the building.    Donations should be made out to NEOWTA noting that the purpose is to recognize Bob Hawks and sent to: